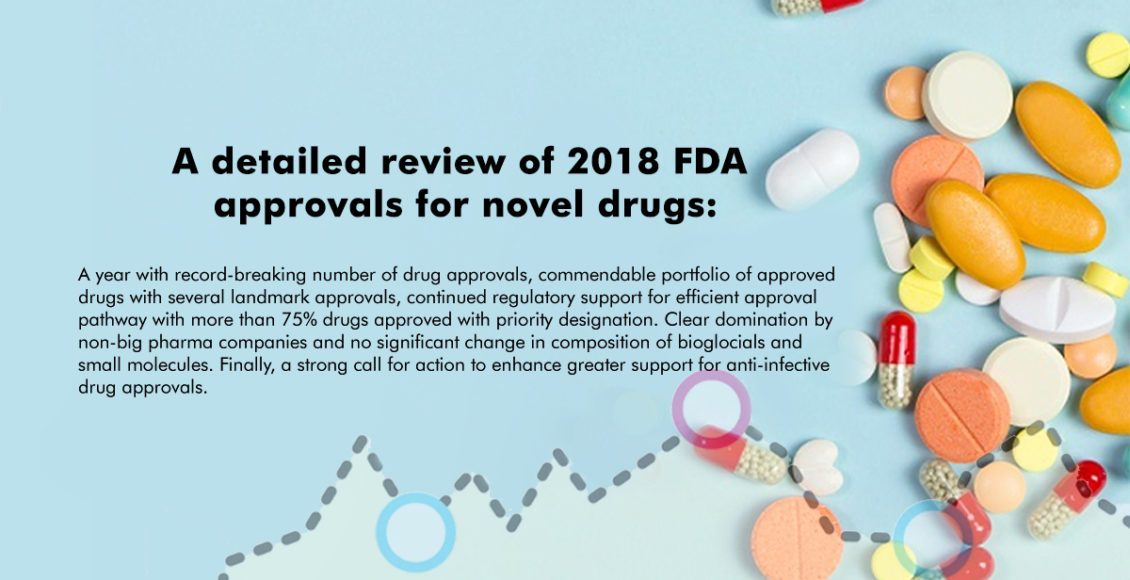 investment momentum, it is also encouraging to note the record breaking regulatory momentum in the year gone by.The US FDA approved 46 drugs in 2017, which had itself matched a 2015 record, but 2018 saw a further surge in novel drug approvals driven by FDA’s focus on accelerating the approval process. FDA went into overdrive in 2018 approving about 59 new molecular entities, a growth of 28% over 2017. The number of NDA and BLA approvals increased by 24% and 42% respectively in 2018 from 2017. The number of approvals were even higher than the number of applications in 2018 indicating an active focus on clearing the backlog from past year filings.

Landmark approvals and a qualitatively commendable portfolio of approved new drugs
2018 was robust not just quantitatively, but also qualitatively given approval of several landmark drugs that signify the potential of science to provide transformative solutions for human health: A new anti-CGRP class of drugs to treat migraine emerged with three contenders Aimovig (Amgen), Emgality (Eli Lilly), and Ajovy (Teva) receiving FDA approvals.The year included FDA approval for first ever RNAi therapeutic drug, Onpattrofrom Alnylam Pharmaceuticals that followed by Akcea Therapeutics and Ionis Pharmaceuticals. The latter gained approval for an antisense oligonucleotide therapy for hereditary transthyretin-mediated amyloidosis, the same rare disease addressed by Onpattro. Another notable new drug approval was for Loxo Oncology’s Vitrakvi, which became the second cancer therapy drug that treats people based on their genetic profile and not the tumor location. Abbvie succeeded with approval for Orilissa, the first new drug for endometriosis to be approved in over a decade. Epidiolex from GW Pharmaceuticals was again a landmark approval as the first FDA approval for a cannabis derived drug (in this case for a rare form of epilepsy). Siga Technologies Inc.’s TPOXX (Tecovirimat) became the first smallpox drug to be FDA approved. Gilead received approval for Biktarvy, a new HIV therapy which is expected to strengthen the company’s existing franchise. Alexion’s Ultomiris combined a landmark solution with benchmark timeline – it was approved in December 2018, two months ahead of its target approval date in February 2019.
Drivers of Innovation: Perpetuating Impact of Emerging Companies & Dilution of Big-Pharma Power
Though big pharmahas demonstrated steady growth in number of new

drug approvals over the past few years, it is companies outside of the traditional big-pharma club that are pushing boundaries on new drug possibilities. They scaled new heights in 2018 scoring more than 70% of the year’s approvals. The 105% CAGR in number of approvals over the last two years (10 approvals in 2016 to 42 approvals in 2018) for non-big pharma companies is truly commendable.
Within the big pharma group, Pfizer stood out as the dominant innovator of the year harvesting approvals for four new drugs: Lorbrena (lorlatinib), Talzenna (talazoparib), Daurismo (glasdegib), and Vizimpro (dacomitinib) all of which were in the field of oncology. AstraZeneca followed with three approvals while Merck and Novartis each won two approvals. The non-big pharma group is an encouraging long tail with several new entrants joining the group. The expanding list of companies is testimony to active capital markets that have been able to power intent of several standalone ventures to advance their assets through investment intensive clinical validation stages without partnering with big pharma. It was a year with significant footprint of Asian companies with not only Japanese companies such as Shionogi and Kyowa Kirin gaining approvals but also emerging market companies such as TaiMed Biologics from Taiwan and Sun Pharma from India.

in number of priority reviews. With close to 75% of the year’s approvals being designated priority, FDA remained committed to this pathway that promises 6 month reviews (vs the standard review period of 10 months) for products capable of “significant improvements in the safety or effectiveness of the treatment, diagnosis, or prevention of serious conditions when compared to standard applications”. Priority reviews were predominantly gained by therapeutic drugs in areas of hematology, oncology, and anti-infectives segment.
However, there was a decline in number of approvals with Fast Track, Breakthrough or Accelerated designations. Only 24% of the drugs approved in 2018 receiving a breakthrough therapy designation compared to 35% in 2017. Breakthrough approvals in 2018 primarily comprised of oncology, anti-infective, and CNS drugs. Around 19 drugs received first in class approvals in 2018, while 39 were first to enter the US markets representing a fall in both categories compared to the previous year.

drug development. Of the 59 approvals in 2018, about 32% of approvals were for various cancers or related co-morbidities. Oncology approvals were equally spread between solutions for solid tumors and blood cancers (10 for the former and 9 for the latter). CNS and genetic/auto-immune disorders both share the position of the second most popular indications with 8 approvals each. Catalyzed by the Qualified Infectious Disease Program (QIDP) pathway and other efforts to bolster level of industry engagement in anti-infectives, 2018’s approvals included 5 anti-bacterials, 5 anti-virals and 2 anti-parasitic drugs. While this is encouraging, the number of approvals and the global clinical pipeline are still insignificant in the context of looming AMR threat across the world and urgent need for more novel therapeutic solutions.

Shift in balance towards orphan drugs
With special incentives put in place by the US Orphan Drug Act 1983, 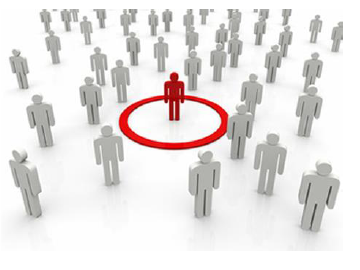 there has been steady tilting of corporate focus towards orphan drugs. When measured as a % of total approvals during the year, there was a decline in 2016 and 2017, but 2018 experienced a significant fillip and outpacing of previous years by a wide margin. Again, the year was landmark with more than 50% of the approvals being for orphan drugs.
This shift in balance towards orphan drugs was supported by FDA clearing of backlog in orphan drug reviews as per the Orphan Drug Modernization Plan (ODMP) introduced in 2017. In 2018, the FDA also rolled outa pilot program for efficient handling of orphan designation requests. The components of the program included a editable form to make the process simple for sponsors and more efficient for FDA review, an on-line tutorial for submission process, and setting up a new inter-center consult process to streamline and standardize communications. These efforts will drive continued regulatory momentum that will in-turn catalyze continued corporate investments in orphan drugs in the near term horizon.
Momentum in biologicals continues but small molecules dominate

Small molecules continued to comprise the lion’s share of drug approvals, contributing 71% of approvals in 2018. 17 BLAs comprised the remaining 29% including 12 antibodies. While the number of BLAs approved increased by 42% (over 2017), they continued to hover around 25% to 30% of total number of approvals.
It is notable that in terms of market value, biologicals have expanded from 17% of the market in 2008 to 26% in 2017 (source: Worldwide Prescription Drug & OTC Sales, Evaluate Pharm World Preview 2017). Given the higher price of most biological drugs, the current approval trends will still support the expectation of more than 30% market value being constituted by biologicals by 2022.

Continuously evolving drug development and application review processes
2018 was again an active year with the regulator emphasizing commitment to continuously improve efficiency and processes for new drug approval. This is particularly relevant in the context of rapidly leapfrogging medical innovations in novel areas of science such as cell/gene therapy and gene editing.
The agency has set clear responsibilities and prioritized deadlines for various stages of the review process. It is encouraging that the regulator has also embraced use of adaptive trials where safety and efficacy are measured more frequently and efficiently. Expanded use of patient registries has favored expedited recruitment of patients into clinical trialsfor rare diseases, further strengthening the system. Finally, the FDA has also made the application process easier for drug sponsors for faster and effective processing of application.
Towards the end of 2018, FDA has also announced plans to initiate new review practices in the Office of New Drugs (OND) in order to build an entirely new organizational structure by mid-2019. The number of review divisions are also expected to increase to a total of 30, promising a faster and well-organized pathway for drug approvals in coming years. 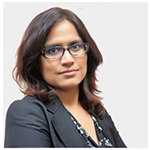 Connect with Authors at: E-mail healthcare@sathguru.com